The CEE Top 500 companies generated a turnover of EUR 580 billion in 2016. The biggest companies experienced decreases in turnover and net profit, but increased their workforces significantly. Automotives overtook oil & gas to become the biggest sector for the very first time. These are the main highlights from Coface’s 9th annual CEE Top 500 study, in which the international credit insurance company reports on the 500 largest companies in Central and Eastern Europe, reflecting developments across the region.

After peaking at 3.5% in 2015 (its highest post-crisis level), CEE average growth dropped to 2.9% in 2016. Economies benefited from the favourable situation on the labour market, with falling unemployment rates and rising wages.“The improving macroeconomic environment has had a positive effect on business, with company insolvencies dropping by 6% in 2016 and 14% in 2015”,explains Katarzyna Kompowska, CEO Coface Central and Eastern Europe.“Furthermore, labour markets continued to improve, resulting in unemployment rates that have reached the lowest levels ever recorded - particularly in the Czech Republic, with just 4.0%. Rising wages and low inflation, combined with improving consumer sentiment, have made household consumption the main driving force behind economic expansion, which had a positive effect on some sectors in CEE.”

The Top 500 companies generated EUR 580 billion in 2016, a minor decrease of ‑0.6%. They experienced a greater downturn in net profit, which fell by -3.1% to reach EUR 26.3 billion. In contrast, employment rates boomed. The CEE Top 500 companies employed 4.5% of the region’s total labour force in 2016 and strengthened their workforce significantly by +3.9%, to 2.24 million people. These developments were reflected in the region’s declining unemployment rates. Unemployment fell by over 10% in ten of its countries - most notably in Hungary (where they fell by -25.0%, to 5.1%) and in the Czech Republic (down by -21.6%, to 4.0%). Unemployment in most CEE countries is now even lower than in Western Europe. The only country which registered higher unemployment than the year before was Estonia, where figures grew by +9.7% to reach 6.8%.

The analysis by sectors shows evolutions in the market. Traditional industries declined and new ones took up the banner. Although overall turnover decreased by -0.6%, nine of the 13 sectors analysed increased their turnover compared to the previous year. The decrease in the Top 500 turnover can be attributed to four sectors: oil & gas (-5.4%), energy (-7.3%), mechanical & precision engineering (-59.1%) and metals (-6.4%). Together, their revenue losses were too great to be offset by the positive performance of the other sectors.

The decline in the oil & gas sector, which previously dominated the ranking, has been observed for some years. With 92 companies (18.4%) remaining in the Top 500, compared to 111 in 2015 (22.2%), the sector’s turnover was negatively affected by the challenging situation on the global commodities market. As a result, over 50% of the 92 firms listed from the industry lost ground in the ranking.

The automotive & transport sector took over the leading position, with a turnover of EUR 128 billion. New passenger car registrations in the EU increased by nearly 7%. This higher demand had a positive impact on car producers, which are mainly located in CEE. The region’s car manufacturers and producers of components and spare parts  thus increased their capacities for Western Europe (their main export destination). Over 20% of all CEE’s Top 500 companies (102 companies) in 2016 were from this sector, up from 17% in 2015. Revenues rose by +8.6% and net profit increased by +6.8%. These positive results were directly linked to the highly favourable economic environment and increasing demand.

Growth in CEE economies is expected to recover following last year’s slowdown.“Coface forecasts that the average Central and Eastern Europe GDP growth rate will increase to 3.4% in 2017 and 3.3% in 2018. Both years will be fuelled by stable growth in private consumption, supported by continued improvements on the labour market. Households have already experienced an increase in prices. This shows a reversal of the deflationary period recorded in many economies during previous quarters”said Grzegorz Sielewicz, Regional Economist Coface Central & Eastern Europe.

Coface, the international credit insurance company, presents its ninth annual study on the 500 largest companies in Central and Eastern Europe, with the Coface CEE Top 500. As well as ranking businesses in order of turnover, the report analyses facts such as number of employees, company frameworks, sectors and markets. 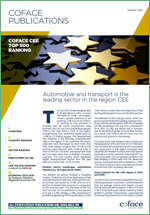 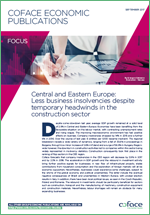