The first quarter of 2014 confirmed the acceleration in global growth: according to Coface's forecasts, after 2.6% in 2013, growth will be close to 3% in 2014 and 3.3% in 2015. The eurozone (1.1% expected in 2014) is slowly but surely recovering from a serious double-dip. The US is showing dynamic and balanced growth (2.7% forecast in 2014), in spite of bad weather in January. A rebalancing of growth is therefore underway: advanced economies will contribute around a third of this (compared to only a quarter in 2013) and emerging countries two thirds.

It is in the context of this confirmed recovery that Coface has upgraded its assessments of several European and emerging economies.

Germany, Austria, UK and Spain: improvement based on increasing investment

The recovery in Western Europe has led to risk stabilisation, even improvement.

It has taken five years forGermany and Austriato return to the A1 best risk category, taking their places alongside the US, Japan and Switzerland. Germany has confirmed its role as Europe's engine, with remarkably balanced growth (estimated at 2% in 2014, after 0.5% in 2013): consumption, historically sluggish, is lively, and investment has started again. The confidence of actors in the economy is therefore high, buoyed by a drop in the number (-8% over one year) and cost (-30%) of insolvencies. InAustria,companies are benefiting from the low cost of credit and German, American and Eastern European recoveries, and are cash-rich. Apart from the insolvency of Alpine Bau in 2013, company insolvencies in the country have been falling for several months.

The UK has been upgraded to A2. Estimated at 2.7% in 2014, its growth could be as dynamic as that of the US and could exceed Germany’s (2%). The upturn in consumption is buoyed by a drop in unemployment. British growth is now healthier, with strong corporate investment, which will be a key driver of economic activity in 2014 and 2015. Furthermore, the Bank of England has taken measures to limit the frenzy over real estate and to favour SMEs’ access to credit. Lastly, British industry is showing signs of renewal, characterised by dynamic innovation, demonstrated by the export success of the pharmaceutical, automotive, aeronautics and defence industries.

A further positive change for another economy in Europe very affected by the crisis: Spain’s B assessment is now on a positive watch.The Spanish recovery is accelerating, with growth of 1.2% forecast for 2014 and 1.7% for 2015. Exports are progressing, favoured by reduced labour costs, and are particularly dynamic for emerging countries. Despite the private sector’s high debt, corporate deleveraging is underway. We note a marked upturn in their financial situation: they have re-established their margins (45% in 2013) and cash flow (above 100%). High levels of unemployment and household debt present major vulnerabilities. However, the signs of an upturn in domestic demand, after remarkable export performances, constitute an undeniable positive development.

Latvia, which has lost the positive watch of its B assessment, suffers from dependence on Russia for its gas supplies. Geopolitical tensions around Ukraine are likely to affect the confidence of Eastern European players and the high dependence of the country on Russian gas explains our withdrawal of the positive watch.

Growth will remain high in emerging countries: 4.4% in 2014 and 4.7% in 2015. They are still benefiting from expanding middle classes and take advantage of advanced economies’ improved growth prospects, particularly via their exports. However, the dynamism of the "major" emerging economies will be limited by domestic supply constraints and political and social risks.

Conversely, other promising emerging countries do not suffer, or suffer little, from these weaknesses. Despite an often difficult business environment, growth potential is particularly high in several African and Asian countries. This finding leads Coface to improve by a notch the country assessments ofKenya(B),Nigeria(C) andRwanda(C).Sri Lankaalso benefits from buoyant growth (estimated at 7% in 2014 and at 6.5% in 2015 by Coface) driven by consumption due to a sharp increase in revenue and transfers from expatriates.

Sri Lanka and Kenya are part of 10 emerging countries that Coface has detected as promising emerging economies.

The Coface Country risk assessmentmeasures the average risk of non-payment by companies in a country in the context of their short term commercial transactions. Sovereign debt is not included in this. In forming the assessment, Coface brings together the economic, political and financial outlooks for the country, Coface’s payment experience and the business environment of the country.

The country risk and business environment assessments are based on a scale with 7 levels: A1, A2, A3, A4, B, C, and D and can be combined with watch categories. 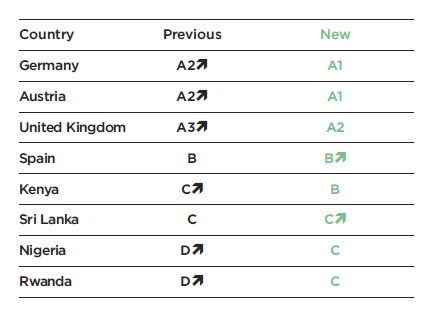 Download this press release : Coface notes an improvement in risks in Western Europe and in "ne... (136.42 kB)