European airlines are among the least profitable in the world: what is the adaptation scenario?

At a time when it appears vital to capture the growth potential in Asia, European airlines are stumbling due to aggressive competition from low cost operators and airlines from the Gulf. Currently, they are among the least profitable in the world. Faced with these new constraints, what changes are conceivable?

Whereas the American internal market was opened up to competition in 1978, the European Union only liberalised its domestic market from 1997. Since then, all European airlines have the possibility to create routes within the region without traffic restrictions and can freely set their prices. The creation of this single market has favoured the entry of new players, mainly low cost airlines, causing a substantial fall in prices of domestic flights. To this end, the number of routes flown by more than two competitors quadrupled between 1992 and 2012[1].

At the same time, further competition has increased even more rapidly on long haul routes, from airlines in the Gulf who have registered excellent performances. This is particularly due to the aggressive strategy of public authorities whose objective is to boost the region. The stakes of airlines from the Gulf in European airlines have accelerated recently, due to their failure to obtain new traffic rights.

With a market penetration of 51,000 seats per million inhabitants, the European market seems relatively well developed. The elasticity between the increase in riches and air traffic appears to be much higher in emerging countries. For a 10% rise in GDP, air transport demand in these countries has increased by 20% - compared to 15% for developed countries. The biggest growth potential is located in Asia, both for now and in the future. For example, in China, between 1992 and 2012 the number of weekly flights rose from 20,184 to 52,651[2].

The entire European airline sector is weakened by these new constraints. European airlines have become the least profitable in the world, as shown by the profit warnings issued by Air France and Lufthansa in 2014. Furthermore, the European Union is suffering on account of airport under-capacities linked to a deficit in investment. This saturation could reduce the prospects for capturing demand and could increase operating costs by 50% by 2050[3].

Towards an American scenario? 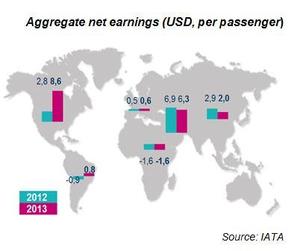 "Faced with this growing competitive pressure, two scenarios are conceivable: invest massively to capture growing demand, or merge to survive. This second hypothesis seems to us to be the most probable, if we consider the changes observed in the American domestic market, which has experienced extensive mergers"comments Guillaume Baqué, Coface economist.

In the United States, the changes resulting from the federal Airline Deregulation Act, in October 1978, have been implemented over three distinct phases:

In Europe a first wave of mergers has occurred (Air France/KLM, Lufthansa/Swiss Air Lines, British Airways/Iberia, etc.), but the hoped-for profitability still remains too low. A further merging movement, comparable to phase 2 of the American scenario, is probable. However, if the emergence of super players in the European Union could enable foreign competition to be tackled, it would be accompanied by new issues such as a possible reduction in destinations and a rise in prices.

Download this press release : European airlines are among the least profitable in the world: what is... (261.49 kB)


Romania at the front line of economic growth in 2013 – but will it catch up after the contraction in 2014?