This panorama first contains a study on World Trade. World trade stagnated in the first halfyear 2014 and is struggling to recover nearly 6 years after the start of crisis. This is a radical change in trend after 30 years of unprecedented expansion: World exports are today 10 times higher than in 1980. Even during the past decade, marked by the 2008-2009 crisis, exports increased two and a half times. This raises the following question: is the slowdown in international trade since 2008 only a cyclical phenomenon or does it rather correspond to a lasting structural change?

To answer this question, we first analyse the different negative effects of the crisis on trade, both direct (weaker economic growth) and indirect (less demand for raw materials, increase in protectionism), before highlighting the role of the internationalisation of value chains in spreading the crisis to world trade. Regional trade, for its part, was unable to compensate for the detrimental effects of the crisis, since it grew little or not at all, Asia being the exception. With part of the recent slowdown in world trade linked to the economic slowdown, weaker growth potential in the major developed and emerging economies makes a return of international trade to its pre-crisis level (more than 8% p.a. on average between 2002 and 2008) unlikely in the short or medium term.

But, in a context of timid pickup in world growth in 2014 and 2015 and ongoing internationalisation of the value chains which sustains international trade, Coface nevertheless anticipates world trade to grow by nearly 5% in 2015, i.e. a higher level than that of the last two years. Besides its pace of growth, the structure of trade will change in the coming years. The tertiarisation of advanced and emerging economies is expected to be reflected in that of trade. This coming tertiarisation of international trade has a big advantage: It should make fluctuations less marked, variations of activity in the services sectors being generally less strong than those in industry. In the coming years, world trade growth will therefore be more moderate but also less volatile. 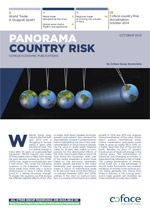